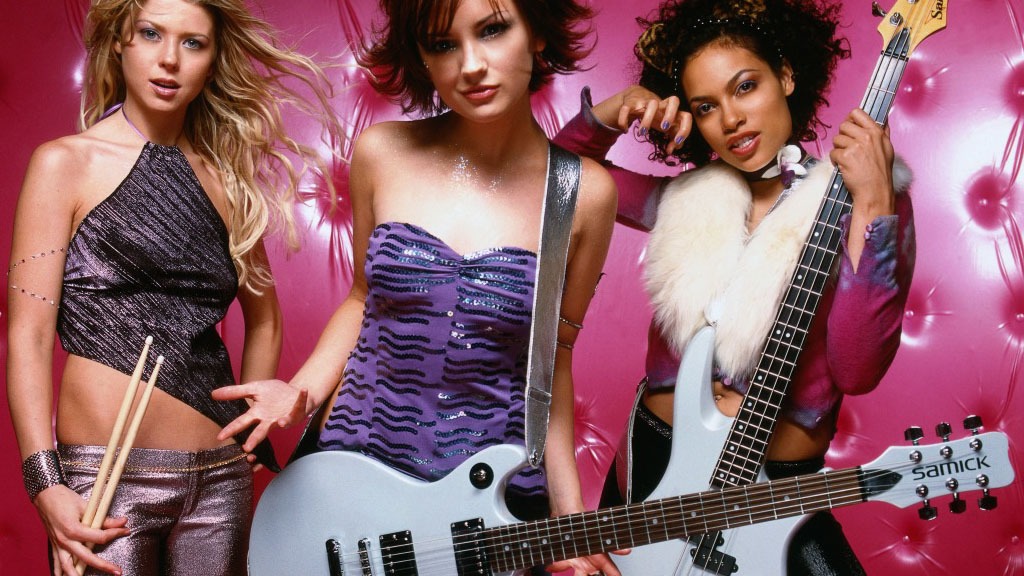 The recording industry, to put it mildly, was doing well for itself as the 20th century rolled into the 21st century. In 2000, NSYNC’s album No Strings Attached sold 9,936,000 copies, just beating the 9,446,000 copies that the Backstreet Boys’ Millennium sold in 1999. In 1998, the Titanic soundtrack had sold 9,338,000 units. To put that into perspective, the second best-selling album of any given year since 2000 was Usher’s Confessions, which sold 7,979,000 copies in 2004. You know how Taylor Swift is quite possibly the biggest, most talked-about artist in the world right now? Her newest album, 1989, was the highest selling album of 2014. It sold 3,661,000 units. Even the most super of today’s super-stars sells just barely over a third of what NSYNC did 15 years ago. Yes, the beginning of the 2000s was the era of boy bands and Britney Spears, and the money was rolling in.

Josie and the Pussycats, released in April of 2001, was filmed during that era’s peak. As a satire of the music business, it’s surprisingly effective (Author’s Note: I have been known to refer to Josie as my favorite movie, perhaps only half-jokingly), though often a little on-the-nose. Record executives are portrayed as cartoonishly evil, profit-driven creatures, obsessed with finding and churning out talent. The movie literally portrays record labels as part of a grand conspiracy to brainwash America’s youth through use of subliminal messages in music. Unbeknownst to the actual recording artists, these messages instruct listeners on the music they should listen to, the products they should buy, and the celebrities they should revere. Once the bands start to suspect something fishy is happening, this cabal of record executives can find ways to ruin them. As Parker Posey’s character, the CEO of “MegaRecords,” explains to a group of politicians and world leaders (who are, of course, in on the conspiracy): “Ever wonder why so many rock stars die in plane crashes? Overdose on drugs? We’ve been doing this a long time. If they start to get too curious, our options are endless. Bankruptcy, shocking scandals, religious conversions.” Cueing up a video of VH1’s  Behind the Music, she explains that they’ve “created a highly-rated TV show just to explain what happens to these people.”

To drive the point about the raw commercialism of the music industry even further home, the film is littered with product placement — the interiors of planes are decorated with Target logos, a bathroom is covered with the McDonald’s golden arches, characters carry around drinks from Starbucks, etc. One sequence, in which a barrage of logos flash across the scene set to a cover of “Money (That’s What I Want),” is positively Godard-ian in its attack on consumerism (and that’s the first and most likely last time Jean-Luc Godard will be mentioned in relation to Josie and the Pussycats). As discussed on the directors’ commentary, the production received no money for liberally sprinkling such brands throughout the movie. These brands are often the subject of the messages hidden in popular music. The particular messages that Josie and her bandmates eventually discover being placed into their music are absolutely hilarious and of their time: “Josie and the Pussycats are the best band ever,” “You also have to buy Steve Madden shoes,” “Heath Ledger is the new Matt Damon.”

Though the satire can be a little obvious, it perfectly captures a moment in time when record labels seemed absolutely invincible. It’s a fun movie, but at its heart it’s wildly cynical — success in music, it asserts, is largely dependent on the whims of large corporations, driven more by the bottom-line than by artistic merit. Talent alone won’t get musicians anywhere; they also need the assistance of an all-powerful record label. Over-the-top, yes, but there was a lot of truth in Josie’s parody of American popular culture.

The world satirized in the film wouldn’t last much longer, however. What the filmmakers may have simply intended as a blunt (but fun!) critique of the music industry’s status quo would, unbeknownst to them, became a portrait of that very industry’s peak just before its dying breaths. On October 23, 2001, just six months after the movie premiered, Apple released the first iPod, thus beginning that whole “death-of-physical-media” thing people are always talking about. The shift to digital media was a huge blow to the established power structures, who had for years relied on physical album sales. The sight of teenagers hanging out in a huge CD store, as shown in the movie, would look completely foreign just years (if not months) after its release.

With a shifting away from physical media, it became easier than ever for a band to distribute their material without an over-reliance on “being discovered” by an agent or scoring a record deal. In a world where anybody can create and disseminate their own work, the cliché of the evil record-executive having complete power has become dated. In the film, Josie and the Pussycats are signed to a contract by pure, random happenstance when an executive sees them in public. Not once does the band discuss putting their music on the internet in order to market themselves, or anything even close to that. In fact, it’s incredible how absent the internet is from the movie in general, which serves as a reminder that while the internet was certainly booming in 2001, it was not yet the force it would become. The pop cultural world of the movie is still dominated by cable television, particularly MTV. This was a time when MTV, and especially its flagship program Total Request Live, served as the tastemaker in contemporary popular music. This stranglehold, too, would begin to collapse with the continuing rise of the internet and introduction of the iPod. People don’t need Carson Daly to tell them what’s cool — they can figure that out themselves.

Upon the release of Josie and the Pussycats we’d only gotten a small glimpse of the coming landscape; Napster had already arrived on the scene and MP3 players were on the market, though not at all pervasive. In fact, nobody in the film is shown listening to an MP3; when Josie is given a copy of her new single, she listens to it on a portable CD player as she takes a walk. Even just a year or so later, that image would’ve looked a little passé. Perhaps the thing that makes the movie more of its time than anything else is the pure physicality of it: the stores and malls portrayed as epicenters of activity would be semi-replaced by internet retail, just as music would soon begin to be sold digitally rather than physically.

Of course, there’s another elephant in the room. The iPod would completely change the way we consume popular culture, but it wouldn’t immediately have an impact on the content we chose to consume. In a way, it’s a bit poetic that the iPod was released just a month after September 11th, setting the fall of 2001 as an interesting demarcation point for both a major cultural and political shift in America. For a while, the events of 9/11 made the tastes of Americans a bit more “mature.” As an example, in May of 2001, the second season finale of the hit reality series Survivor had a whopping 41.26 million viewers. When its third season premiered in October of 2001, the number of viewers had dropped to 23.84 million. After 9/11, something as petty as a reality game show just seemed a little trivial. Likewise, Josie and the Pussycats would’ve been similarly alien to a viewer immediately post-9/11. It portrays an exaggerated version of the world just a few months earlier, a world obsessed with boy bands, celebrities, and having the latest brands. That fall, America would turn its back on these things, at least for a brief time.

In certain respects, Josie and the Pussycats may resemble present-day America with our renewed interest in celebrity culture — looking at you, Kardashians — more than the America of the years immediately following 9/11. It’s a film that would be entirely different were it filmed now given how much the music industry has changed, but also wholly different in another direction if filmed just a year or so after its original release date. As it stands, though, it’s a perfect specimen of our culture at the turn of the century. Nothing offers a glimpse of what America was like just months before things changed forever quite so beautifully. I wouldn’t want it any other way.

Eli Sentman is a writer and unapologetic lover of fictional bands.