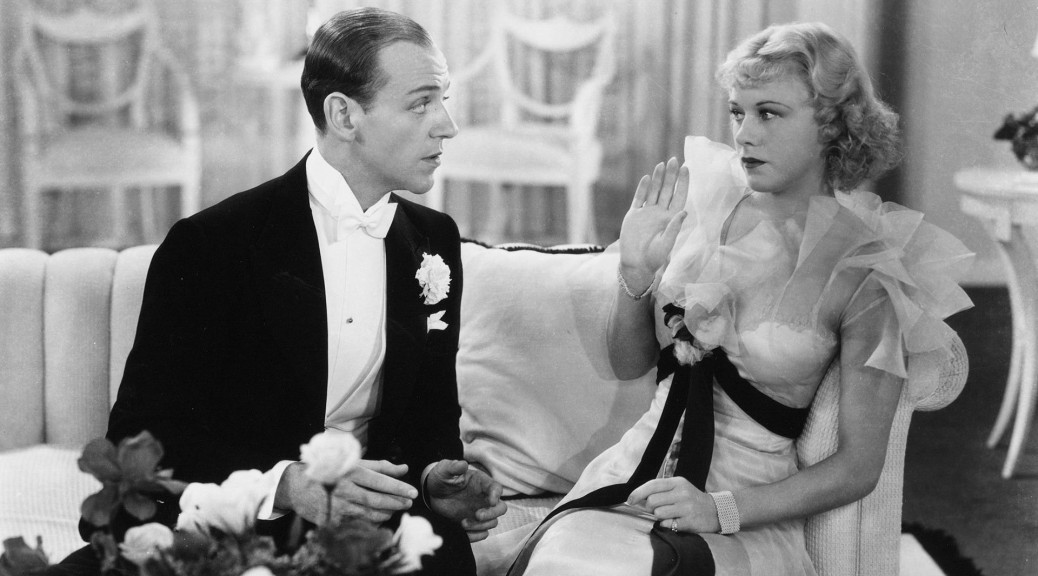 They say history is written by the winners. Well, that was before the Internet. Our regular column And The Loser Is… looks at memorable movies that didn’t quite grab the brass ring.

The Movie: The Gay Divorcee (1934)
The Award: Best Picture, 7th Annual Academy Awards (1935)
Who Did It Lose To?: It Happened One Night
Should It Have Won?: No
Did It Win Anything?: Best Song – “The Continental”
Other Nominees: The Barretts of Wimpole Street; Cleopatra; Flirtation Walk; Here Comes the Navy; The House of Rothschild; Imitation of Life; One Night of Love; The Thin Man; Viva Villa!; The White Parade

1934 marked the end of an era for classic Hollywood cinema. Since 1929, the Hays Code, a puritanical list of potentially pernicious content movies should avoid, had been loosely enforced. Still, too many deliciously ribald pictures, like Baby Face and She Done Him Wrong, were slipping through the cracks and corrupting pure American souls. On July 1st, 1934, the party officially ended with the Breen Era mandate that all films must receive approval from the Production Code Office prior to release.

Still, like savvy revelers stealing a bottle of whiskey at closing time, a few films kept the Pre-Code party going just a little longer. Lusty musicals like Ernst Lubitch’s The Merry Widow and Busby Berkeley’s Dames retain an unbridled sensuality, and even 1935 Best Picture winner It Happened One Night has a slightly licentious spanking scene.

Of all the nominees that competed with It Happened One Night, The Gay Divorcee feels most like the Pre-Code era’s last gasp. Had the film gone into production just a few months later, as the Production Office’s grip strengthened, it might not have been made at all. While Claudette Colbert’s Cleopatra could have been covered up, and a bit about bigamy in The Thin Man cut out, the entire premise of The Gay Divorcee rests on the suggestion of extramarital sex.

Guy (Fred Astaire) meets Mimi (Ginger Rogers) while the dress she’s wearing is stuck in a suitcase. Guy attempts to help free her, but the dress tears, so he offers his rain coat to cover her rear. A meet-cute so suggestive the Production Office sent notes to ensure the scene would be “handled with great care to avoid any objectionable exposure of her person,” according to TCM’s exhaustive and invaluable notes on The Gay Divorcee. Though Mimi is annoyed at the strange man who tore her dress off, Guy is smitten. They run into each other once more in London. After Guy corners her in the woods, showers her with niceties and, like a total MRA creep, expects her to instantly fall for him, Mimi remains unimpressed; but, when by chance (“the fool’s name for fate”) their paths cross again at a seaside resort, he sings “Night and Day” and dances with her with such suave elegance she can’t help but fall in love. 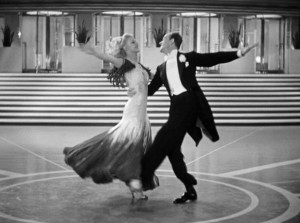 If only she weren’t hiding the fact that she’s married and at the resort to feign an affair with a hired gigolo so that her husband will grant her a divorce. This plan was cooked up by her lawyer – who also happens to be Guy’s best friend – Egbert Fitzgerald (Edward Evertt Horton), who had convinced Guy to come to the resort with him to forget about the girl he’d been pining over. Mimi of course mistakes Guy for Egbert’s hired gigolo, and, thinking he’s being paid for the pleasure, angrily invites him to her room at midnight. Guy is confused, but isn’t one to turn down an illicit midnight affair. A brief bit of mistaken identity with the genuine gigolo ensues, though Ebert’s Idiot Plot is mostly avoided. After the extended (17 minute long!) “Continental” sequence, containing both exhilarating moments of rapidly edited abstractions reminiscent of Ballet Mécanique and deliriously dull medium shots of mugging actors repeating the refrain, the end arrives and Fred and Ginger dance out of the frame and into film legend. However, the subtext of The Gay Divorcee suggests Guy and Mimi’s happy ending probably won’t last too long.

The Gay Divorcee begins with Guy and Egbert on a layover in France. At a cabaret, young Parisian women sing upon a gigantic turntable, resembling a fetishist’s zoetrope, which spins as they make little finger-puppets dance the can-can with their hands. The turntable rotates so quickly their faces start overlapping and blending into one another. This effect is repeated during the “Continental” sequence when women in black and white gowns stand in a revolving doorway, rotating with the doors, as static one-shots cut from door to door and woman to woman, creating a dizzying effect amplified by the twirling of dozens of dancing partners. This spinning motif underlines one of the more subversive implications of The Gay Divorcee: the idea that relationships are not really meant to last, and marriage is little more than a revolving door. Most single characters have been divorced, and every married one is either cheating themselves or being cheated on, and often both. This flippant attitude towards marriage flies in the face of the Production Code rule to “emphasize good taste” towards the institution.

The Gay Divorcee also undermines marriage with Mimi’s Aunt Hortense, a serial divorcee played by Alice Brady with effervescent flippancy. Aunt Hortense speaks of her previous marriages as if they were expensive meals, providing temporary delight but of no lasting value. The most serious she gets is advising Mimi not to have a divorce on an empty stomach. Hortense also exhibits a progressive sex-positive attitude throughout the affair. Following the luggage incident, Mimi tells her Aunt “a man tore my dress off,” and an unruffled Hortense asks, “Anyone we know?” Later, when Egbert sends Mimi up to her room to wait for the gigolo, Aunt Hortense attempts to join her, leading Egbert to protest “You can’t have a clandestine affair between three people!” to which Hortense scoffs, “That’s what you think.” Eventually Hortense and Egbert are married off screen, though the institution means so little to her at this point she has forgotten about it entirely be the time they rejoin Guy and Mimi. 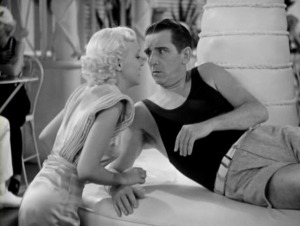 Like Aunt Hortense, Egbert is another surreptitiously seditious force. Played by frequent Astaire/Rogers co-star Horton, Egbert is Guy’s best friend, though one could be forgiven for mistaking them as lovers. Horton was gay in real life (both happy and homosexual, in a long-term relationship with a younger actor), and brings pride and dignity to his effeminate supporting role. Dubbed “Pinky” by his father because he used to dress in “pale pink pajamas,” Egbert does all he can to avoid Hortense’s marriage advances, and shows an absolute disinterest as a young, ”lipsticable” Betty Grable longs to teach him to “knock knees.” Egbert does show a longing to knock knees with a cute young delivery boy though. After the two collaborate on an impromptu whistling duet, Egbert hopefully asks, “Time for an encore?” Sadly though, the delivery boy must go.

The Gay Divorcee was the first film with Astaire and Rogers as leads, though they had played supporting roles in Flying Down to Rio, which was a huge success. They would make better (if less prurient) films together, including Top Hat, Swing Time and Shall We Dance, but it is easy to see how The Gay Divorcee charmed its way to a Best Picture nomination. The sophistication of Astaire and Rogers’ exquisite dancing juxtaposed with the salaciousness of midnight affairs and meaningless marriages makes The Gay Divorcee a time capsule of Hollywood in transition. By the time of the Academy Awards ceremony in 1935, movies would become more preoccupied with covering knees than knocking them.

Kevin Cecil is an ex-substitute teacher trying to figure out what those who can’t teach can do.