In retrospect, it’s surprising how quickly the Wachowski siblings shot to the top of the directing A-list. They wrote a draft of the middling 1995 Sylvester Stallone/Antonio Banderas actioner Assassins, released their debut film Bound in 1996, and then used its strong critical reception to get their magnum opus, The Matrix, made three years later. No clear through-line connects those three screenplays; none of the unique mysticism of The Matrix is present in the other two, and neither of the other two have such a revolutionary approach to homosexuality as Bound does. It’s not until one sees Bound that the future success becomes predictable, for few films take time-honored material and present it in a new and radical way as Bound does.

The movie follows Violet (Jennifer Tilly), the kept wife of low-level Chicago mobster Caesar (Joe Pantoliano). Violet seduces the female handyman of her building, Corky (Gina Gershon), who just happens to be an ex-con with all of the talents necessary to rob Caesar and allow the two women to escape together.

The Wachowskis have cited Billy Wilder as an influence on Bound, and it seems at first that Violet might be the sort of villainous femme fatale that motivates the plot of, say, Wilder’s Double Indemnity. Except for this: why must the femme fatale be a villain? If Caesar has Violet trapped, if her real identity is to be Corky’s lover and Caesar is suppressing that, why shouldn’t she scheme to turn on him? What is Violet doing that anyone in her position, gay and straight alike, would not do?

On that simple question, Bound turns the classic film noir on its head, but the film plays out in many ways as though no such turn ever happened. Corky’s plan is to turn Caesar and his bosses against each other, a film noir tactic as old as Raymond Chandler and Dashiell Hammett. As the plan goes haywire, Violet must move beyond simply wanting “one big score” and seize her own independence, no differently than the protagonists of films like The Score or Michael Mann’s Thief. It’s a sign of how confident that the Wachowskis already had become as filmmakers: they took whatever they wanted from classic films, kept what would work for the story they wanted to tell, and discarded the rest. 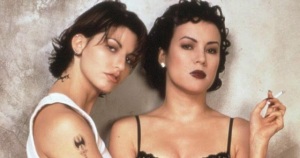 The most revolutionary aspect of Bound is that it though its central relationship is between a gangster’s moll and a thieving ex-con as in so many other crime films, the fact that they are both women, and lesbians, creates a dynamic that no other film noir has explored before or since. Violet’s role in Caesar’s mob means that she is closeted by necessity, and by embarking on their scheme together Corky is joining her there (in fact, most of the film is told in flashback while Corky is literally hidden in Violet’s closet). The only way their plan can work is if they reveal everything to each other, but show nothing to the world around them. Where most films, including Double Indemnity, turn upon the fact that the femme fatale is too dangerous to be trusted by the criminal she sees every day, Bound creates a dynamic around the reverse: that the femme fatale and criminal are the only ones who can trust each other, but it’s dangerous for them to be seen together.

The film is so matter-of-fact about its sexuality that most studios wouldn’t touch it. The Wachowskis received offers to make the movie if the Corky character were a man, but that would have missed the whole point: the only reason Corky and Violet can trust each other enough to attempt their thievery is because they share the same secret, one of the most intimate secrets they could have. Making the film independently allowed the Wachowskis to preserve that element of the story, and to make the sex as graphic as they liked (they hired a feminist consultant to make sure the sex was realistic as possible).

In many ways the Wachowskis’ success set the template that Hollywood has followed since. Major studios now scour the independent scene for directors with a unique vision and a level of confidence, and hand them the reins to their biggest blockbusters. Colin Trevorrow parlayed Safety Not Guaranteed into Jurassic World, Gareth Edwards turned Monsters into Godzilla, and many more, all because Andy and Lana Wachowski made a debut so self-assured that there was no doubt stardom lay within.