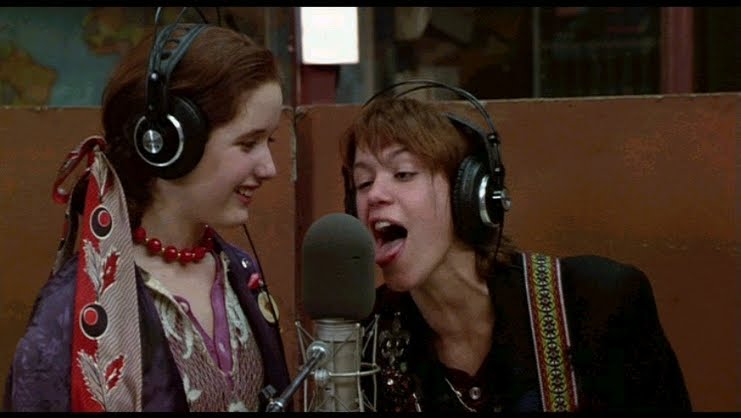 “The question we want to ask ourselves today, especially those of us with children, is this: do we want to live in an X-rated city?”

So asks David Pearl (Peter Coffield), the head of the Mayor’s Commission to Clean Up Times Square. It’s his mission to clean the area of its porn theaters, hustlers, and all-around sleaziness. Standing before a meeting of the commission, he recounts to the crowd a story about refusing to allow his 13-year-old daughter Pamela (Trini Alvarado) to go see One Flew Over the Cuckoo’s Nest. “I don’t care if she has to lie about her age to get in, “ he explains to the audience, “After all, I’m a liberal. But when she told me where the damn thing was playing, 42nd St and 7th Ave, I had to put my foot down.” Pamela, seated behind her father, is furious. The story he’s telling is entirely fictional. After she creates a scene by running from the room in tears, the first thing her father thinks to do is send her to the hospital for a mental evaluation. He sees his daughter not as a person, but as a tool he can exploit to further his agenda. If a daughter doesn’t want serve as pawn for her father to use, well, she must be crazy. 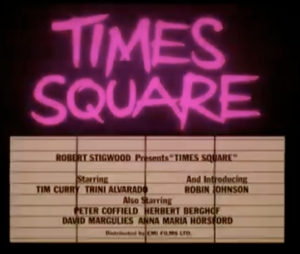 Beginning with its opening shots, Times Square treats the audience to now unfamiliar images of the eponymous neighborhood. Instead of the schmaltziness of places like Guy Fieri’s American Kitchen, there are grindhouse theaters with posters for movies like Cry Rape. The streets are littered with shady-looking characters running scams.  It’s a world that Pamela, without a mother and neglected by a father, is fascinated by. She writes poems under a pseudonym about feeling like a “zombie” and sends them to a radio DJ named Johnny LaGuardia (played by Tim Curry, the film’s only real star), who himself broadcasts from the heart of Times Square. LaGuardia hates public figures like Pamela’s father, who he sees as an enemy of everything that makes the neighborhood cool. In 1980 the idea of Times Square as a cool place was not entirely laughable; the Times Square of that era may not have been a pleasant place, or even a safe place, but it was a hell of a lot more interesting than it is today.

Confined to the hospital, Pamela meets a street kid named Nicky, played by Robin Johnson. She exudes a punk-rock spirit that Pamela can’t help but find magnetic, and the two girls become fast friends.  After all, the frustration Nicky feels toward the way she’s been treated by society, along with the condescension she’s often met with by social workers, isn’t all that different from the frustration Pamela feels as a result of her father’s neglect. In one of the film’s more ridiculous scenes, the pair steals an ambulance and escapes the hospital, making a home for themselves as runaways in an abandoned building at the Chelsea Piers (insert your own joke about New York rent prices). 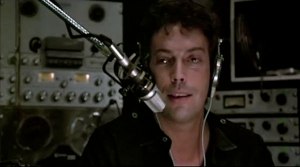 Pamela and Nicky’s friendship grows much deeper as they create a home together. They make a blood pact and begin writing songs, calling themselves the Sleez Sisters. Johnny Laguardia, who discovers that the girl writing into his show is none other than the daughter of David Pearl, allows them to play live on the radio, much to the chagrin of Pamela’s father, who is still desperately trying to locate her. The pair enjoys their lives as runaways, making money by working as squeegee girls, or in Pamela’s case, as a dancer at a strip club (though she forges an unbelievable deal with the owner that allows her to dance with her top on). Eventually, with the help of LaGuardia, the Sleez Sisters become a mini-sensation within the hip, in-the-know crowd of New York City.

It wouldn’t be unfair to call Times Square a love story. The queer subtext is there for anybody to see, as Pamela and Nicky have a relationship bordering on obsession with one another. Sadly, this marks one of the ways in which Times Square is most a movie of its time. The film originally included material that made the relationship between the girls explicitly romantic. The producer of the movie, Robert Stigwood, who saw the project as something like a punk-rock Saturday Night Fever (a movie he served as a co-producer on), insisted that all lesbian content be removed, which eventually resulted in director Allan Moyle leaving his position before the film was finished. His vision for the project was more gritty and true-to-life, with music serving as a force that connects two young girls in love for the first time. But in 1980, the studio simply wasn’t ready for a movie about lesbian teenagers.

The conflict between producer and director explains a lot about the final product. The film begins losing the thread of its plot as it nears the end. The girls have a falling out that seems to come rather suddenly, and Pamela decides that the runaway lifestyle isn’t quite for her, but it’s never made clear exactly what forces this realization upon her. Other plot developments are similarly unexplained. The Sleez Sisters’ rise to fame among the young, New York crowd comes suddenly, and we’re never quite sure how. There’s a real sense watching the final act that something has to be missing. For that, Robert Stigwood and his aversion to lesbian material is largely to blame.

Times Square the movie suffered a similar fate to that of Times Square the area. Allan Moyle saw through all the grime and wanted to represent Times Square for exactly what it was, warts and all — a seedy place sure, but a unique one. He’s the real-life Johnny LaGuardia. The movie he sought to make would be equally as grimy as the neighborhood itself. Robert Stigwood, however, was the real-life David Pearl, bent on removing from Times Square anything that made it even a little subversive. A lesbian romance simply didn’t have any place within a film that he expected to be just another coming-of-age story complete with popular music.

Even the film’s soundtrack is proof of Stigwood’s meddling. On one hand, it features accepted punk-rock or new wave luminaries such as The Ramones, Patti Smith, and XTC. These are all choices that Allan Moyle likely would’ve approved. However, when the disco song “Help Me” performed by Robin Gibb and Marcy Levy plays over the ending credits, Stigwood’s influence is all too obvious. You can’t help but imagine Stigwood thinking to himself, “People loved Saturday Night Fever, so it can’t hurt to end this movie about punk-rock runaways in Times Square with some disco!” The conflict between the director and producer over just what Times Square was supposed to be may just be its most dating element, perhaps even more so than the on-location photography.

The final product is a uniquely 1980s attempt to re-appropriate the burgeoning punk scene into a mainstream hit. In addition to Saturday Night Fever, Stigwood was the producer of music-focused hits such as Grease, Tommy, and Jesus Christ Superstar. Perhaps Times Square would’ve become a hit if it weren’t for Allan Moyle’s idea of the film as something entirely different. Alternately, if it stuck more closely to Moyle’s vision, perhaps it would be a better movie than it ultimately turned out to be. Instead, the end result was straining towards gritty and subversive, while still remaining woefully anesthetized. In that respect, it’s the perfect film to represent both what Times Square was, and what it would soon become.