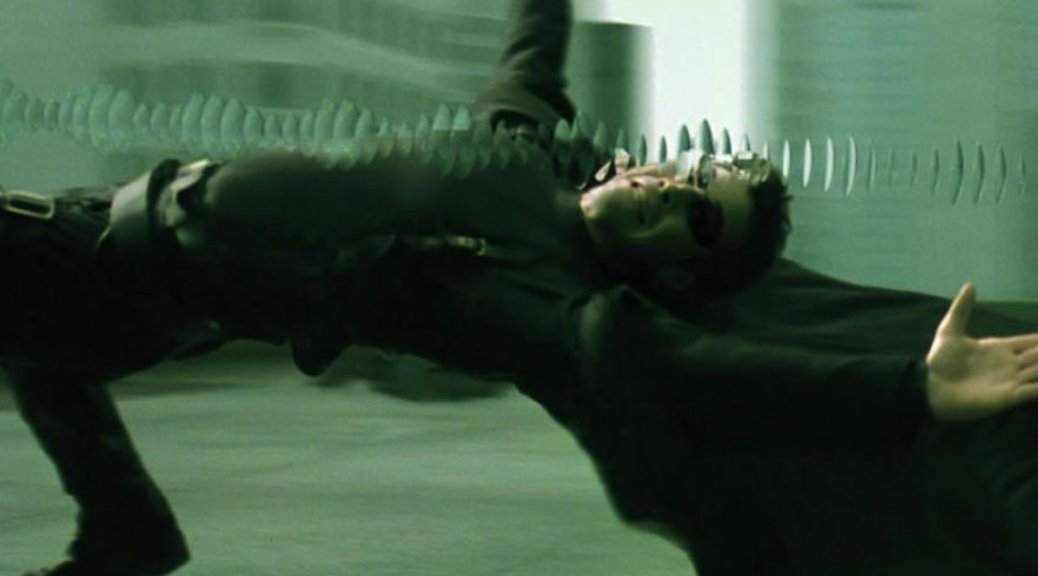 Why do we remember The Matrix so well? It was a surprising financial success for an R-rated film, of course, but that aspect of the story has always been overrated — The Matrix isn’t the highest-grossing R film of all time (it’s not even in the top 10, though the sequel The Matrix Reloaded is). It was a surprising critical success for an action blockbuster, but the following year Gladiator would enjoy the same amount of raves, with even more Academy Awards added on. The special effects were groundbreaking, but in some ways that actually works against The Matrix, because its central “bullet-time” concept was appropriated by so many pale imitators that it quickly became tiresome. So what, exactly, causes the film to hold up fifteen years on?

Simply this: The Matrix was revolutionary. It was a forceful, emphatic broadsides against the way that films were being made, the way that stories were being told and the low expectations that so many studios had of the audience. It was a new kind of story, with a new kind of action and a look that no one had seen before. There have been action films since then that have been influential with their financial success, the Marvel movies especially, but no action film since The Matrix has been so influential with its artistry.

I mentioned the story in connection with last week’s movie, Bound, but it bears repeating: The Wachowskis’ rise to fame was meteoric. Their script for the film Assassins was good enough to turn heads in Hollywood, and that allowed them to sell the scripts for Bound and The Matrix as well. After showing that they had stylistic flair by directing Bound, Warner Bros. and Joel Silver decided to take a chance by giving the siblings $60 million to direct their sci-if script. This was despite the fact that half of the A-listers in Hollywood turned the film down, claiming not to understand what it was about — most famously, Will Smith passed in order to make the dire Wild Wild West.

It’s much easier to “get” the movie now, of course, because we have a better frame of reference for how the movie’s artificial reality works: World of Warcraft or Second Life are obvious templates. But at the time, the idea that artificial intelligence had enslaved mankind, keeping humans trapped inside a computer simulation of the year 1999 called the Matrix, was far out there for anyone who had not read William Gibson. Even though the story of Neo (Keanu Reeves), the hacker turned savior of the human race, is a standard “hero’s journey” plot, grafting it onto such a challenging concept made it feel fresh and new.

It was also the perfect idea to bring Hong Kong to Hollywood in earnest. John Woo and Jackie Chan had already made English-language films by this point, and Jet Li had already played a villain in Lethal Weapon 4. But no one had yet found a way to translate the most classic Chinese style, the high-flying wuxia films that made Li a superstar, into English such that audiences would see it (John Carpenter had tried, with Big Trouble in Little China, but that film was a financial bomb). By asserting that gravity within the Matrix is just a piece of computer code that can be hacked, the Wachowskis found the perfect way to marry high kicks and high sci-fi. 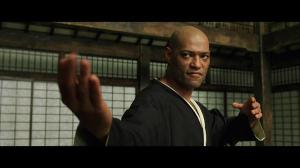 To execute their plan, they recruited the unsung hero of the entire Matrix trilogy, Yuen Woo-Ping, whom the siblings learned about from his fight choreography on Jet Li’s masterpiece, Fist of Legend. Yuen is a master of visual styles of martial arts: he can do the soaring wuxia choreography, or he can do a realistic Bruce Lee-esque style, and anything in between. The fact that Neo can download any kind of fight style into his brain in seconds is a sly commentary on the hero’s journey — one can imagine the Wachowskis saying, “half-hour-long training scene? Let’s just skip it and get to the good stuff!” — but it also required Yuen to pull out all the stops, as his hero can literally fight any style he can imagine.

Yuen put his actors through a grueling training process, which was itself revolutionary. The idea of taking actors who were not martial artists and training them had not been done before; it was thought that the training would take too long for results that stuntmen could execute just as easily. The Wachowskis wanted the versimilitude of a Hong Kong film, with close-up shots of seemingly impossible stunts that are simply impossible when you’re using stuntmen, so the actors trained for months to carry those stunts out. This is not to say there weren’t stunt doubles — Neo was performed in some scenes by the veteran stuntman and martial arts master Chad Stahleski, who would later direct Reeves in John Wick — but the actors did more than anyone imagined you could do with actors who weren’t black belts to begin with.

The only actor who suffered a serious enough injury in this training as to impair his performance was Hugo Weaving, but that’s fine, because he would have thoroughly stolen the movie even if he hadn’t done a single fight. Weaving, who had a well-established career in Australia prior to The Matrix, is unbelievably good as the evil program Agent Smith. One might think he is performing “robotic,” from his oddly neutral accent and diction to his precise movements. But it’s an artificially intelligent version of “robotic,” one that is capable of some facsimile of anger and contentment. He is an independent character with his own goals, and they are reasonable goals (everything that Smith says during his “human beings are a plague” monologue is true, from his point of view). The Wachowskis had a very clear conception of how its villainous artificial intelligences would think, and with Weaving they turned it into the best action antagonist since Hans Gruber in Die Hard.

What was the point of all of this attention to detail? It was to connect all of the science fiction in such a way that the Matrix would feel like reality. The virtual realities previously presented in film were comically unreal. Nobody was confusing the blocky 8-bit digital worlds in films like The Lawnmower Man or Virtuosity with the world they saw as soon as they walked out of the theater. But through the uncanny camera of the great cinematographer Bill Pope, the Matrix feels like the world we see every day, only with certain colors flattened to accentuate its drabness. Smith and the other agents are strange — even the extras in their scenes treat them oddly — but they’re no less real than the average Secret Service agent trying to act inconspicuous.

In fact, the movie’s realistic and unique approach might turn out to be a net negative for society: almost every person in the world who wishes to promote how rebellious and revolutionary they are, from conspiracy theorists to renegade politicians, have appropriated the film’s “red pill/blue pill” imagery to their own ends. The movie isn’t to blame for that, but it is an unusual side effect from being a revolutionary film: every would-be revolutionary afterward thinks it’s walking in your footsteps. It’s the price paid for greatness.