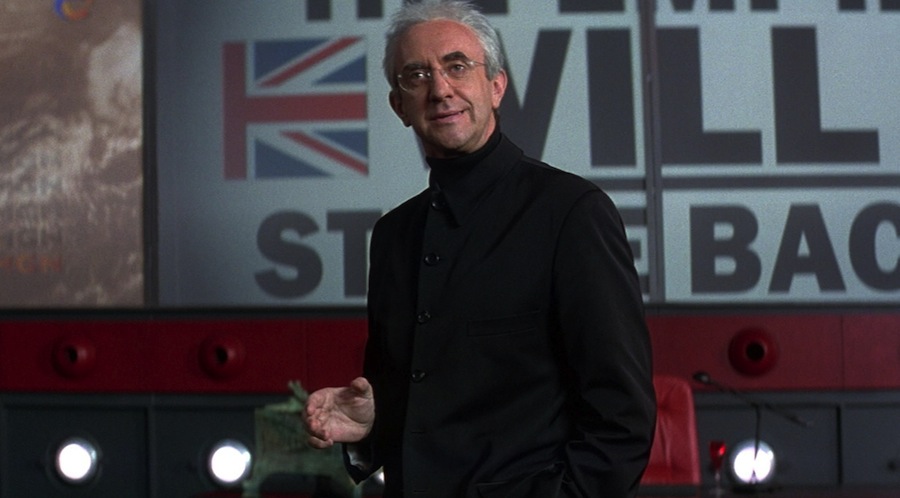 Sometimes, real life offers individuals holding such large amounts of power that, with just a touch of extra villainy, they could be Bond villains. Rupert Murdoch is one such individual. The Australian billionaire constructed a media empire that encompassed tabloid newspapers (the U.K.’s News of the World and Sun, as well as the New York Post), films and television production (20th Century Fox), and publishing (HarperCollins). October 1996 added 24 hour news to the roster with the launch of the Fox News Channel. Many people were already distrustful of Murdoch and his newspapers placing a premium on shock than on being a public service. The Fox News Channel seemed to expand his reach even further and give even more of a platform for his political views. What would happen if this man was actually a full-on diabolical villain?

A little more than a year after Fox News Channel premiered, Tomorrow Never Dies came out in December 1997 with an answer to this question. The previous two Bond films, License To Kill and Goldeneye, had featured more realistic and serious villains than the films from the Connery and Moore eras, and it had seemed that Pierce Brosnan would play Bond accordingly. Forget all that, Tomorrow Never Dies says: Elliot Carver, as played with gusto by Jonathan Pryce, is a cartoon villain who just happens to own a large media empire. Carver grasps his PAD and his typewriter like Blofeld grasped his cat, barely containing his excitement when checking in with his underlings about all of the chaotic news that his media empire will be able to cover. Carver is so powerful that he can blackmail presidents with scandalous pictures for relaxed media rules, and so sadistic that he then orders one of his division chiefs to release the pictures anyway. 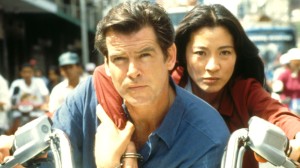 One of the key elements for the rewatchability of a Bond film is how effective the villain is. A dull villain can lead to For Your Eyes Only or Octopussy, which are mostly as forgettable as the antagonists. If there’s one thing that Elliot Carver can be accused of, it definitely isn’t dullness. Jonathan Pryce seems to be having the time of his life as he relishes hamming up Carver’s many elaborate speeches. Carver’s mockery of Wai Lin (Michelle Yeoh) after her capture, including an over-the-top impersonation of her martial arts skills, is something that should be just stupid but becomes actively hilarious because of how much fun Pryce seems to be having. Pryce plays Carver as a Bond villain who’s acutely aware that he is a villain, which turns the image of Murdoch into the sort of mustache twirling caricature that many people already saw him as.

Amusingly, Carver’s plans aren’t even about taking over the entire world. The elaborate plan, which involves using a stealth submarine to try to bring the U.K. and China into a near nuclear confrontation, is a scheme to install a new leader for China that will allow Carter’s newly launched 24 hour news network exclusive broadcasting rights in that country. If it also allows them to create a crisis which can be covered by every aspect of his media empire, all the better. It’s a diabolical plot that made the most sense in the late 1990s, when the media landscape was still in the process of becoming more consolidated. In the 21st century, these media empires are the norm and it’s harder to make the general public worry as much about it.

If the producers had waited another decade to put the plot of Tomorrow Never Dies in motion, they would’ve seen Murdoch’s News Of The World brought down by actively committing an actual crime: Private investigators hired by the paper had hacked the cell phones and intercepted the voice messages of thousands of people, including several families of British servicemen killed in action and at least one murder victim [Editor’s note: that’s hardly the only crime the paper committed! Check out the “Controversies” section of its Wikipedia page, it’s an entertaining/depressing read]. That tale could have provided even more fodder for a James Bond spy thriller. Instead, audiences will just have to enjoy the megalomania of Elliot Carver rather than the actual evil that men like Murdoch inflict upon the world.

Scott Goldfarb is a student of the arts, trying to continually keep on improving and learning more about the artform he loves so much.