Only four years separated the release of Die Another Day (the last of the Brosnan-era Bond movies) and that of Casino Royale, which introduced Daniel Craig to the series, but the two are so stark in their differences that they may as well have been made decades apart. Die Another Day, despite its profitability, was widely reviled as a new low in the series’s history, and Eon was anxious to course correct.

When it was announced that the next film would be based on Fleming’s first James Bond story and depict the start of his spy career, the new direction was widely seen as a new direction for a franchise that had descended into self-parody as well as a fresh jumping-on point for newer audiences. Some fans of the franchise were soured by the new direction, nostalgic for the outlandish plots and playfulness of the previous outings (see Joe Cornish’s very amusing alternate Quantum of Solace theme song). And while there is an undercurrent of self-awareness in the film, the plot largely avoids the wink-wink nudge-nudge humor that the franchise had become riddled with. But Casino Royale proves to be an entertaining and successful example of how to do an origin story right. It simultaneously succeeds as an entertaining access point to the films’ often convoluted history and a tip of the hat to what’s come before.

While the reboot and prequel craze is old hat by now and “grim and gritty” is a punchline, in 2006 it was still a novel way to inject excitement into established franchises. Batman Begins had been released the previous year to critical and commercial acclaim, and it made sense to reintroduce Bond in a similar manner. In years previous, audiences had been flocking to more serious and realistic action films, perhaps in response to the messy nature of the Western world’s engagements in Afghanistan and Iraq and the ensuing atmosphere of paranoia and disillusionment. The Jason Bourne films were in their heyday as well, a gritty series which portrayed an abandoned American spy having to get by on his wits and his fists alone. The depiction of spycraft as practical and a bit ugly certainly influences Casino Royale, especially the story’s opening sequences. Instead of the traditional cold open, which usually depicted the climax of a ridiculously over the top mission, the film begins with a black and white depiction of Bond earning his Double-Oh status. The scene is certainly unglamourous, with Bond notably making his first kill in a public toilet. 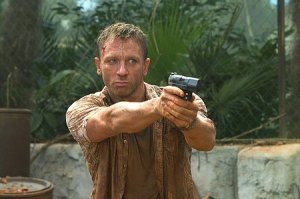 This James Bond has yet to evolve into the slick and dapper superspy fans were accustomed to. No invisible cars or exploding pens here; the fanciest doodads he gets are a Sony laptop and a defibrillator in his luxurious-yet-otherwise-normal car. In the aforementioned opening fight in the toilets, Bond and his target fight like barroom brawlers: grappling on the tile floor, stomping on limbs and bashing each faces into ceramic sinks. Daniel Craig spends the first act of the film in a state of constant grubbiness. This Bond sweats and grunts and stumbles, a beaten and bloodied mess who’s described by M (in a tone of exasperated disgust) as “a blunt instrument”. At one point, he’s even mistaken for a valet at an upscale country club.

The world of Casino Royale and the threats within it are more recognizably grounded in our own present. Bond has battled terrorists before in previous outings, but the acts that main villain Le Chiffre (Mads Mikkelsen) funds aren’t of the outlandish, nerve-gas-the-earth type. M (Judi Dench) connects Le Chiffre to the shorting of airline stocks immediately before 9/11, and he’s shown lending his support to military juntas and insurgent bombers alike, his only ideology being the almighty dollar (or pound, or yen, etc).

Accordingly, Bond’s worldview and tactics owe much to America and the U.K.’s more aggressive and preemptive incarnation of the intelligence community. He defends killing a potential source of information instead of bringing him in for questioning because now there is “one less bomb maker in the world”, and at one point he is mistaken for an enemy combatant himself by American security forces. It’s all but impossible to watch the infamous rope-to-the-balls torture scene without the specter of Abu Ghraib and the sexually humiliating tortures used there.

Arguably the most important shift in Casino Royale’s tone is the Bond Girl, or, to put it more plainly, the lack thereof. Eva Green’s Vesper Lynd is a touchstone in the series, an exceptional example of the new course the film was charting. It’s not as if the series jettisoned its traditional depiction of women entirely; Bond still seduces them for information, and they still often end up as collateral damage. But his relationship with Vesper reflects a vulnerability in his character that hasn’t yet been destroyed by experience. Vesper is shown as a sharp and capable person, but is markedly different from some of the stock Strong Female Characters Bond had been paired with over the years. Die Another Day’s Jinx, for example, is equipped to go toe to toe with Bond but ultimately has no characterization beyond her fighting skills, rendering her a cardboard cutout. In comparison, Vesper is no action heroine, but it doesn’t matter because her characterization is much more well-rounded and vibrant.

Here it’s important that Bond is the one who swoons over her rather than the other way around. Vesper’s presence allows him moments of being caring and human when the character is rarely allowed to be either of these things. When she quietly breaks down in the aftermath of a d

eadly fight, Bond doesn’t use her emotional vulnerability as an excuse to make a move on her. Instead, the scene is transformed into a moment of comfort and connection between them, romantic because of its lack of sexuality rather than despite it. Bond ends up clearly head over heels with her, to the point where he is more than happy to kiss off his MI6 job and sail off into the sunset.

This all goes wrong, of course, but Vesper’s betrayal and subsequent self-sacrifice is played as a genuine tragedy when it could easily carry no emotional response. In other Bond films, the line “The bitch is dead” would be delivered as a quip or a glib kissoff. Instead, it marks Bond’s decision to shut away any compassion and become the ruthless figure of our pop culture consciousness. That line, more than any other in the film, is the one which rebooted James Bond.

Lauren Baggett has been obsessed with film since early childhood and possibly the womb. She is the unchallenged champion of waiting in line for movie screenings and enjoys popcorn for dinner.