Amy Schumer has been a working stand-up comedian for more than a decade, but she shot to the top of the A-list so quickly that I wasn’t even aware it had happened until after her breakout hit film, Trainwreck, left theaters. Watching Trainwreck at Movie Klub this week, it’s easy to see Schumer’s appeal: it’s wildly dirty and sweetly good-natured at the same time, the same combination of forces that made There’s Something About Mary a hit, but with a unique voice all its own.

Schumer plays Amy Townsend, a writer for a Maxim-esque magazine called “S’Nuff.” She’s a party girl who gets hammered every night and takes a guy home, but never spends the night and returns to work every morning to hear her editor (Tilda Swinton) green-light unspeakable garbage. It doesn’t look like a terribly fun existence, but Amy is enjoying it and doesn’t want anyone judging her … until she meets a mild-mannered sports surgeon (Bill Hader) and starts judging herself.

Typically, there would be a red flag already: when the star of a film (who, in this case, also wrote the screenplay) is playing a character with the same first name, an acting disaster usually follows. But it’s not that way with Trainwreck; in fact this could be the best-acted comedy of 2015. Brie Larson, who could have won an Oscar for her previous film Short Term 12 and could well win one for her newest film Room, plays Amy’s well-adjusted sister. Hader is note-perfect in a role which could easily have devolved into stereotype. Ezra Miller, one of the most talented young actors of his generation, has a throw-away role as Amy’s intern. Swinton, who seemingly had already done everything an actress can do in her career, transforms herself into a funhouse-mirror Anna Wintour for a revelatory comic turn. Even wrestling superstar John Cena delivers work that is both hilarious and heartfelt.

At the center of it all is Schumer, who wrote fascinating material for herself. Her stand-up persona is unrelentingly dark and dirty, to a degree which dwarfs other famously profane female comics; even the title of her Comedy Central sketch show, Inside Amy Schumer, is probably the dirtiest double-entendre on TV. If Trainwreck can be said to have a mission statement, it is, “What’s wrong with that?”

There are large numbers of movies featuring the sort of character that Schumer plays, constantly re-telling the tale of “unapologetic cad settles down, finds true love.” But almost all of these films star men. THere’s a clear double standard in play, where women are judged more harshly for sleeping around than men, which should be clear from the fact that there’s no word which implies the incorrigible-yet-harmless tone of “cad,” but for women. Trainwreck throws down the gauntlet against this worldview from the opening scene, in which Schumer’s voiceover says, in effect, “my Dad was a rogue, he raised me to be a rogue, I think it’s kind of awesome, don’t judge me.”

Additionally, most of those “cad films” have an awkward moralizing at their core, imploring the cad to stop being a cad because a cad is a terrible thing and being a family man is the right way instead. Trainwreck subverts that entire idea by focusing on Amy’s happiness. It’s often suggested that she should stop giving up on her ways because she’s becoming a slut — and every character who thinks that sort of thing is a horrible person that the audience would like to see punched in the face. The characters we care about are concerned with one thing and one thing only: whether or not living this way is making Amy happy. If she wants to live this life and is completely okay with it, that’s just fine. 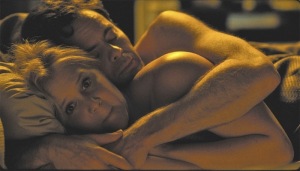 With that established, it’s easy to show that, voiceover notwithstanding, Amy isn’t at all happy. Her love life is rather like her job: working for “S’Nuff” is better than being homeless, and sleeping around is better than being alone, but none of those options is especially fulfilling. Amy lives the way she does as an energetic way to ward off creeping self-loathing — something Schumer does a fine job of under-playing as an actor — but an endorphin rush is not happiness.

Judd Apatow’s direction leaves a lot to be desired for fans of sharp cinematography and visual storytelling, but those are not the only things that a movie like this needs a director for. Apatow is also well-known for the way he puts his films together: he’ll ask the actors to do a dozen takes in a dozen different moods, often encouraging lots of improvisation, and then assemble the final movie out of the best parts of the various takes. The most important directorial decisions in an Apatow movie, the audience never sees — the material left on the cutting-room floor which would have made a scene look weird or unfunny if it had been left in.

The only time both Schumer and Apatow show weakness in this film is at the end. Act Three begins with a comical intervention; that scene, and everything afterward, seems weak and ineffectual compared to the sharpness of what came before. The finale is sweet and warm, but it involves very few actual jokes from Schumer, which is a weird shift from the snappy patter she’s done throughout the movie up to that point. Oddly, this seems part of a pattern for Apatow: many of his films, (The 40-Year-Old Virgin is a good example) sputter to a halt rather than leave the audience feeling electrified.

However, there’s nothing at any point in Trainwreck which goes so wrong as to leave a bad taste in the mouth afterward. Trainwreck is going to satisfy every desire an audience could have, unless that audience would be powerfully offended by hearing the most vile tampon-related improv that Amy Schumer can manage. In truth, rather than describe this film as a gender-switched version of a cad film, it might be better to call it a comic remake of an indie film about loneliness. It’s Amy Schumer’s Shame, and like that film, it succeeds in everything it wants to accomplish.