When you come to a movie a little later than everyone else, there’s a tendency to doubt the conventional wisdom you might have heard. Can Mad Max Fury Road possibly be as good as everyone says it is? (Cinephile City says yes!) Can the newest Fantastic Four possibly be as bad as I was reading on Twitter? (Cinephile City says yes!) Well, as regards the newest film from Disney and Pixar Studios, Inside Out, take one thing away from this column if nothing else: it will make you cry as much as everyone says it will, and possibly more. It’s also possibly the best film Pixar has ever done. 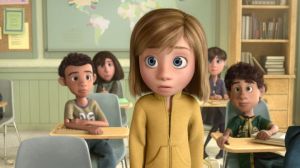 The film starts with the birth of a young girl, Riley Anderson (Kaitlyn Dias), and immediately zooms inside her head to watch as she develops the five emotions which will run her brain: Joy (Amy Poehler), Sadness (Phyllis Smith), Fear (Bill Hader), Anger (Lewis Black), and Disgust (Mindy Kaling). They run the show in the massive mindscape of Riley’s internal life, hoping to form great “Core Memories” which will stick around forever. Things are running smoothly in Riley’s life until, after moving to a new house at age eleven, an accident separates Joy and Sadness from the rest of the group. Her entire emotional world begins to fall apart without them, and they must race back to “Headquarters” to fix her emotional state.

It’s impressive how deeply that premise is mined. The gorgeous, expansive vistas of the mindscape are imaginative enough, but then there are the various implications of the ways these emotions interact. The idea that Disgust, pretending to be the absent Joy, would manifest as sarcasm is a tidbit of genius, as are the occasional zooms inside the heads of Mom and Dad to see how they have the same combinations of emotions, but in different roles (Dad is run by Anger, Mom by Sadness). The idea of how an annoying song gets stuck in your head sets up an effortless, brilliant joke, and the idea of how a nightmare comes to be is fully and hilariously realized.

The Pixar animation wizards don’t get enough credit any more; they’ve revolutionized the medium in so many ways that the phrase “beautiful Pixar movie” has become old hat. Still, it’s hard not to watch the scene where Riley literally loses her train of thought in awe. Equally impressive is the way color is used in both the mind-world and the real world as an indicator of emotion: the dark nightscape of Riley’s deep memory is as gorgeous as the candy-colored flavors of her imagination.

All of those colors essentially serve to turn Inside Out into a nostalgia-powered cry machine. From minute one, the film invests every moment in the young Riley’s life with titanic amounts of weight – even the moments in her life which won’t be a big deal to her ten years from now, they’re a huge deal to these characters, because their whole job is her emotional state. Anyone who can resist tears at the story arc of Riley’s imaginary friend Bing Bong (voiced by the great character actor Richard Kind) is made of different stuff than this critic. The stakes in this movie could not be higher: every minute is potentially a formative minute for Riley, and every thought she’s ever had is a person with hopes and desires.

This is why Poehler is a great choice to voice Joy. Much of her comedy, going back to her Saturday Night Live days, is about normal people whose happiness is not just contagious but relentless, an oppressive force, oblivious to whatever the conditions might be outside the bubble of their own brains. Joy is no different. She wants Riley’s life to be completely happy, but that’s not how it works, and the film’s comedy and drama alike spin around her discoveries of that fact. It’s also important that Joy is still a child, Riley’s emotions being no more mature than she herself is, and Poehler is highly skilled at being a little immature and clownish as appropriate.

Some of the most powerful moments in the movie are simple ones. The first time Joy and Sadness try to find something in common, for instance, when it becomes clear that Sadness is simply incapable of being happy. Equally powerful is the moment when we understand that you can’t have catharsis without her. The most important aspect of this screenplay is that it understands how Joy can break things by trying to do right, and Sadness can do good just by being herself.

Think about how rarely movies do this, especially animated ones. When was the last time a children’s film, from Pixar or anyone else, told us that it was a positive thing to be sad? It’s not just the movies, either, because audiences respond to that outlook – there’s a reason the Pixar movie which has sold the most merchandise is the relentlessly optimistic Cars. Rarely does any film say something so frank as what this film says: that there is a place for Sadness, and Anger and Disgust too. We can’t be whole human beings without them. They have to be allowed to run things sometimes, and that the memories they create have value.

If you wanted to nit-pick Inside Out, there are things your inner Disgust could take issue with. For instance, Dias does not sound even remotely close to eleven years old. But that would be letting one emotion run your Inside Out experience for entirely too long. Allow Sadness and Joy run hand in hand as well: Sadness at how powerfully cathartic its treatment of lost memories, and Joy at how wonderful it is when a masterful movie is made.